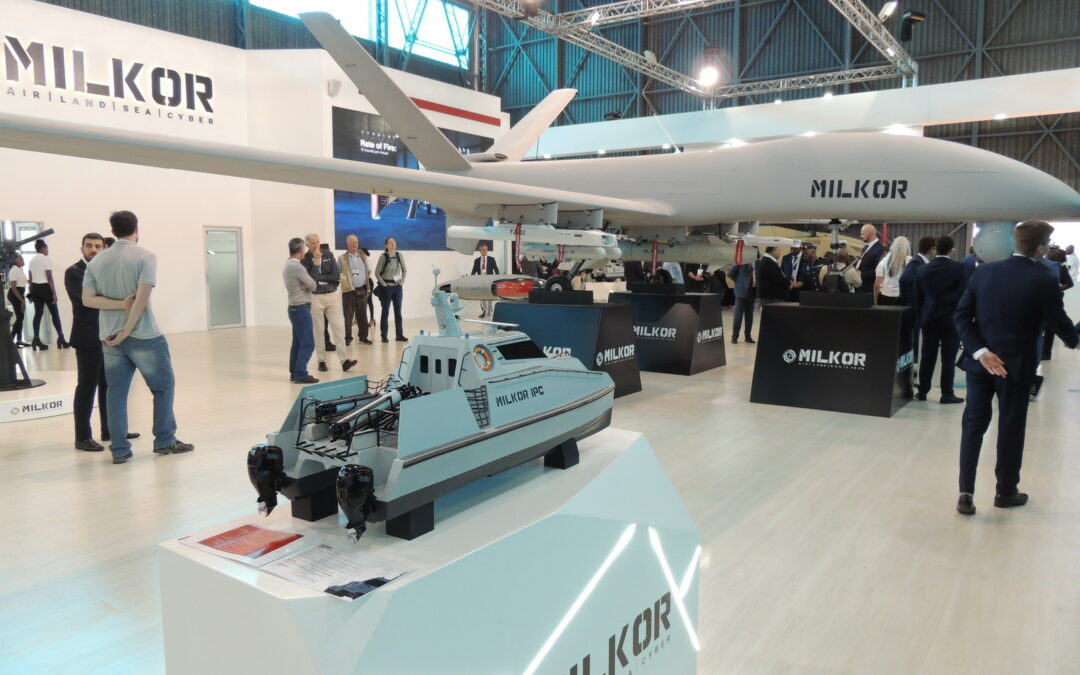 As the Diamond Sponsor of the 2022 edition of AAD, Milkor is taking the opportunity to showcase all its products on home turf. Since exhibiting at the last AAD in 2018, Milkor has new developments to show, especially regarding unmanned aerial vehicles (UAVs) and armoured personnel carriers (APCs).

The 18.6 metre wingspan aircraft is fitted with an L3-Harris gimbal system but gimbals of various sizes and weights can be fitted. The Milkor 380 at AAD 2022 is also being showcased with an Airborne Technologies SCAR (Self-Contained Aerial Reconnaissance) pod which Milkor says is ideal for things like maritime surveillance, especially when used on conjunction with the gimbal. The SCAR pod can be fitted with many different sensors, but at AAD is displayed with a ViDAR (Visual Detection and Ranging) optical radar system.

Since debuting its Milkor 4×4 Armoured Personnel Carrier (APC) at the previous edition of AAD in 2018, the company has further developed the vehicle to suit end-user requirements. The original vehicle was built with high ground clearance and high level offroad performance ideally suited to challenging African terrain. The vehicle’s operational capability has been expanded to deployment in the desert with the option of an inline central tyre inflation system and an upgraded cooling package. Multiple electronic sensors and remote-control weapons stations (RCWS), such as a 12.7 mm machinegun option, have been integrated to increase the mission capability, situational awareness, and personnel safety of the vehicle. Milkor also offers an anti-riot version of its APC – the latter was deployed during the July 2021 unrest in South Africa.

Whilst the initial target market was African militaries, interest and opportunities for the vehicle have come from outside the continent, including from the Middle East, South America, Asia, and Eastern Europe, Milkor said.

For decades best known for its range of multiple grenade launchers, notably the SuperSix range, Milkor has over the last couple of years further developed and expanded its weapons range, with improvements covering the Milkor AGL (Automatic Grenade Launcher), UBGL (Under-Barrel Grenade Launcher) and new MAR (Multiple Anti-Riot) grenade launcher. The AGL is taking a standout position at AAD 2022.

Other equipment Milkor is keen to highlight it flagship naval vessel, the Milkor IPC (Inshore Patrol Craft). This is suited for any navy, coast guard or military. “The vessel is a one of a kind in the industry and is built for long endurance missions. Operations of up to five days can easily be accomplished through a unique design and layout that combines crew comfort with operational functionality that is suited for surveillance and potential engagement. Various features and configurations of the Milkor IPC will be on display at AAD 2022 highlighting Milkor’s marine design and manufacturing capabilities,” the company said.

The growing product range is in line with Milkor’s aim to become an established global leader in the defence industry, with a growing international presence. Milkor has opened offices in India, the United Arab Emirates, and Saudi Arabia. It has taken part in all the big international defence trade shows, including DefExpo in India, Defence Services Asia in Malaysia, Defence and Security in Thailand, and now Africa Aerospace and Defence.