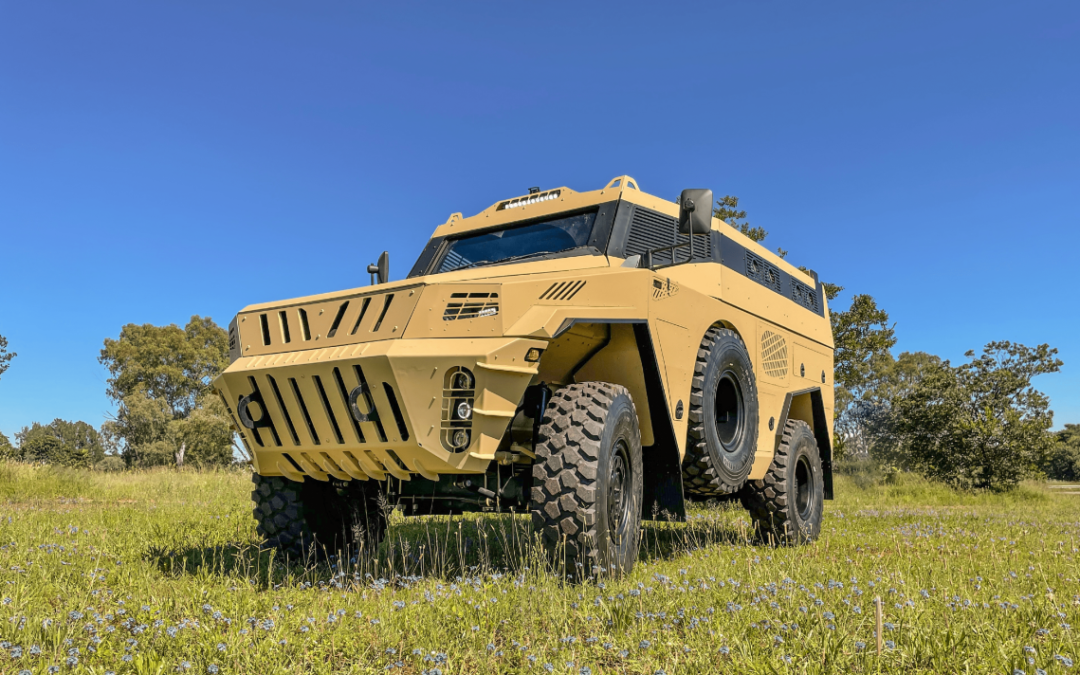 Multi-role capabilities are one of the main focus points Milkor uses when developing their platforms, with each platform being able to easily and effectively be customised depending on end user requirements received. This focus means that Milkor is able to use their knowledge obtained from end users currently utilising these platforms and apply it to their platform development. They then adapt and improve on these platforms, enabling them to be used in other defence and security application outside of the initial requirement.

The Milkor 4×4 armoured personnel carrier (APC) has undergone extensive development with Milkor adding various customised options suited for use by Police forces, Gendarmeries and Security groups. The Milkor 4×4 can be equipped with a front mounted scraper that clears away barriers, debris and immobilising objects. Optional roof mounted grenade launchers capable of firing less lethal grenades can deploy tear gas and other less lethal grenades in a 360-degree radius around the vehicle. The Milkor 4×4 offers various levels of armouring from B2, which can withstand a 9mm round, all the way to B7 which can stop armour-piercing and sniper rounds, ensuring occupant safety in various situations. The Milkor 4×4 anti-riot was deployed in the July Unrest experience in large parts of South Africa in 2021.

Milkor’s weapon range also offers less-lethal options, with the latest being the MAR (Multi Anti-Riot) 6 shot rapid fire grenade launcher capable of firing 37,38 and 40mm Anti-Riot ammunition in quick succession. The MAR has specifically been designed with less-lethal engagements in mind, weighing less than 4kg, operator mobility is uncompromised and extended periods of weapon handling is made easier. The UBGL (Under-barrel grenade launcher) can easily be attached to existing anti-riot weaponry and rifles, adding to the capabilities of the weapon. With the uniquely designed trigger system the UBGL operator does not have to alter their grip to fire the grenade, this means that the operator can continuously suppress a crowd with the main anti-riot weapon and use the UBGL when the need arises. The lightweight design of the UBGL, at 1.1kg, means that operator fatigue is kept to a minimum for longer handling periods ensuring police, gendarmeries and security forces can prolong their presence in de-escalating efforts. The stopper convertible is a single shot grenade launcher that can easily be equipped as a secondary weapon alongside the main anti-riot weapon. With a skilled operator able to fire 12 rounds per minute, the impact a stopper convertible can have on an escalating situation is immediate and far reaching.

The Milkor IPC (Inshore patrol craft) is a 12m hydrofoil assisted catamaran vessel capable of reaching speeds up to 50kts. With features like 3 sleeping beths and head and shower facilities it enables a crew of 4 to stay comfortable on long endurance missions with the IPC capable of staying active for up to 5 days. The vehicle is fitted with 2x 450hp engines ensuring maximum efficiency while patrolling while also enabling rapid response to emergency situations if needed. The IPC is the ideal vessel for patrolling rivers and coastlines for rapid detection and interception of maritime crimes like human trafficking, contraband smuggling, illegal fishing, illegal immigration and piracy. With a vast array of electronic hardware and software available the IPC can also effectively be used in search and rescue operations.

Milkor will be showcasing all these offerings at the latest Africa Aerospace and Defence (AAD) show on 21-25 September 2022 at Air Force Base Waterkloof. They are the Diamond sponsor of the event, and their stand will be located in Hanger 4.