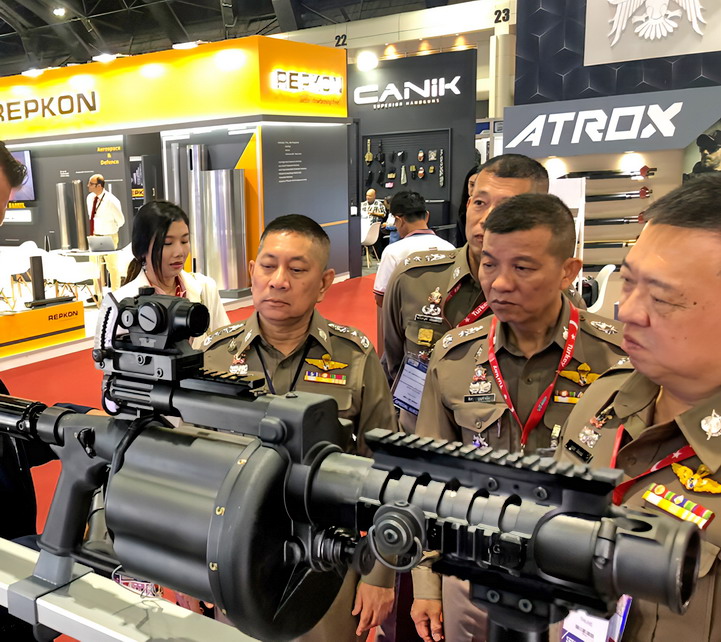 Global defence solutions provider Milkor is setting its sights on Thailand’s Defence and Security 2022 show later this month, when it will showcase its expanded range or air, land, and sea platforms as well as 40 mm weapon systems.

Milkor has already supplied more than 65 000 of its multi-shot grenade launchers in several versions to armed forces around the world. The most recent addition to Milkor’s grenade launcher range is its automatic grenade launcher, designed to provide suppressive fire out to over 2 000 metres. The belt-fed weapon has a rate of fire of 400-500 rounds per minute and uses a variant of 40×53 mm grenade ammunition.

With a large portion of international trade in this region facilitated through well-established shipping trade routes, it is vital to ensure that threats to this export avenue are continuously monitored and dealt with accordingly, Milkor said. The company’s Inshore Patrol Craft (IPC) is available in various configurations that can aid countries in identifying and intercepting maritime crimes and threats, ensuring safe trade routes can be established between nations.

The vessel features an innovative hydrofoil-supported catamaran design, which gives a remarkably high top speed of 90 km/h and, due to the reduced drag of the hydrofoil design, better range than conventional vessels (up to 750 nautical miles). Weapon options include a 12.7 mm remotely operated turret, 20 mm cannon, 40 mm grenade launcher and missiles. The IPC has been demonstrated in the Middle East.

With Defence and Security 2022 set to be the biggest show yet in Thailand’s history, Milkor will continue building on existing relations in the region. “We are focussed on establishing long term relations with the Asian continent and setting up relevant after sales support systems. This show provides us with the necessary platform to engage with the relevant parties and showcase our abilities as a defence solution,” said Tyron Lafferty, Head of Business Development Asia at Milkor.

The company’s Medium Altitude Long Endurance (MALE) UAV offers the Southeast Asian countries a solution to patrol the vast number of land and sea borders effectively and efficiently. With payload capabilities including the likes of SAR/iSAR, various EO/IR cameras and advanced communication systems, Milkor says it can provide a customised solution to suit the specific end user requirements.

The flagship Milkor 380 MALE UAV has a wingspan of 18 metres and has five hardpoints: two on each wing and one at the centre of the fuselage, with the ability to carry larger systems if needed – payloads can include guided munitions. All avionics, communications, and payload integration capabilities of the aircraft have been developed in-house by Milkor.

“As we continue to build on existing relations in this region, we are excited to showcase the world leading capabilities we have to offer. Milkor wants to establish itself not only as a reliable defence equipment provider but also seek to collaborate with countries from this region to develop and enhance their local capabilities,” Lafferty said. Milkor has already opened offices in India, Saudi Arabia and the United Arab Emirates as it continues to build partners and expand globally.

The Thailand Defence and Security Exhibition 2022 is set to take place from 29 August to 1 September 2022 at the Impact Exhibition and Convention Centre in Bangkok, Thailand, where Milkor’s product range will be on display at stand N13.