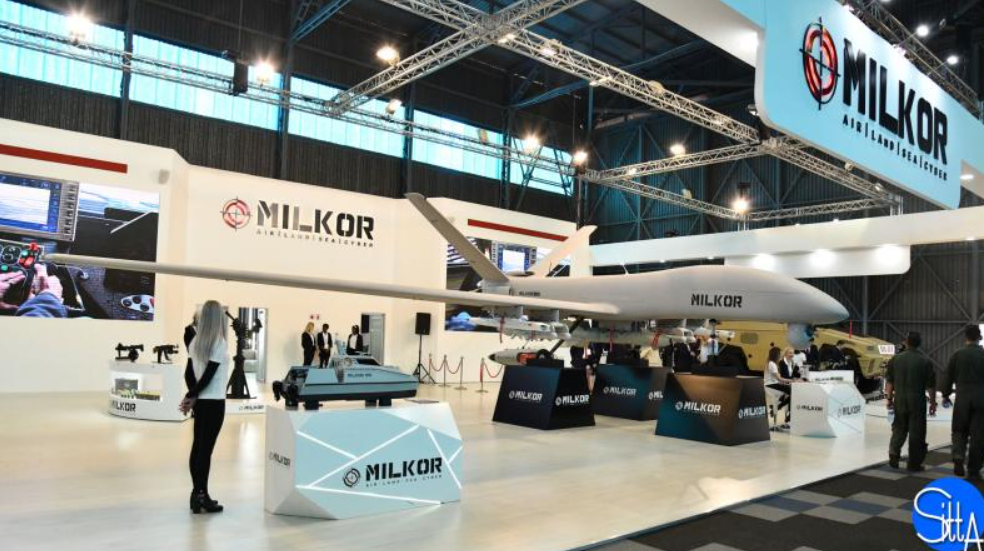 Africa Aerospace and Defense (AAD), took place at Waterkloof Air Force Base from September 21-25. This edition gave pride of place to Turkish defense industries which have doubled their presence since the last edition. Other international visitors in 2022, China, India, Pakistan, United Kingdom and United States. Russia and Belarus were also among the exhibitors. Nearly 50 official delegations walked the aisles of AAD 2022.

The themes announced by the organizers for AAD 2022 talk about exploring new paths, sharing solutions, showcasing innovation and related capabilities. The exhibition is co-chaired by AMD, Armscor and CAASA, organizations supported by the Ministry of Defense and its Minister Thandi Modise.

The latter made a point of inviting the media in preview of the show in order to explain the expectations of the South African government and its forces, welcoming all the participants.

Before presenting the trends and materials that have aroused the interest of SITTA, it should be noted that local companies have once again demonstrated that they have strong research and development offices, aware of the current economic difficulties and who in addition to continuing their experimental research, like what is presented by the CISR group, progress tirelessly in the evolutions and other modernizations of existing systems. All of this is in addition to the various partnerships that continue to exist between South African groups and foreign companies.

We could only quote the local official declaration which concerned the OTT group, designated as the first local producer of armored vehicles, but it is especially necessary to insist on this theme dear to the South African show, closely linked to the production of armored vehicles. and their subsets, namely protection, armaments or even modernization and adaptability. The competition is fierce and it was clear that many experts in the field were present to offer their new products and their evolutions, to scale and in the form of models.

Note in particular the presentation of the MRAP MAATLA type armored vehicle, offered by the Paramount group and intended for the security forces. This armored vehicle, developed on a civilian basis, in order to save cost and support, has already received two offers for 50 vehicles, including one from an African country. That is to say the interest that is brought to him.

Similarly, how not to mention the 4X4 MILKOR, offered by the group of the same name. This armored vehicle based on an IVECO chassis and for one of the two examples present, equipped with a remotely operated Spanish cupola from the EM&M group, seems to be particularly competitive.

DENEL offered a wide range of old vehicles (the RATEL for example) modernized, as well as two versions of its BADGER 8X8 (VBCI and anti-tank), but we will focus on the latest evolution of the RG-32M which never ceases to find buyer, with Sweden, Finland, Ireland or even Namibia.

The OTT group, mentioned above, offers an evolution of the M36 Mk6, called 450 T-REX, heavier, more imposing and more powerful than the previous versions. A Mk7 version is already in preparation, which should arouse many desires.

Do not forget the IPC group which presented its latest evolution of the REVA V, which responds to the latest requests from users in terms of mobility, protection and habitability.

Finally, to finish with the South African part, we will mention the SVI group (which received the prize for the most beautiful outdoor stand) with its MAX armored vehicles (3 and 9), based on the Land Cruiser chassis, which reduces the costs considerably.

Internationally, only models were presented, of systems already known and for some proven, like the KIRPI-2 of the Turkish group BMC, or the collection of armored vehicles produced by the Emirati consortium Streit Group. The Chinese group NORINCO offered a range of vehicles such as the VN1 (with a new turret, it seems) or the VN22 6X6.

In connection with these armored vehicles, for many evolution and modernization, several local and foreign companies presented associated products.

In terms of armament, we must mention the company EVOTEX, which presented two remotely operated cupolas, armed with a .50 caliber machine gun or 40 mm pots. The version with a machine gun was also presented on an armored vehicle of the OTT group.

The Spaniards of the EM&E group had mounted a remotely operated cupola on the MILKOR 4X4, while DENEL offers its SDROW cupola (Self Defense Remotely Operated Weapon) adaptable to many armored vehicles and other land vehicles.

The SHERG group offers a whole range of turrets, with manual operation, but also electric or even remotely operated with its KS-4. The latter is interesting because it has a removable “ceiling” between the operator and the armament which allows reloading from the inside. This turret can be armed with a machine gun or a cannon up to 30 mm.

On the electronics and communication side, we will retain the local group REUTECH, which presented many new digital communication stations integrated into a whole panel of vehicles in service or prototype.

Similarly, the South African group GC2T presented an integrated command system in a 4X4 armored vehicle, with four workstations that were particularly user-friendly in their use and efficient in their capabilities.

Finally, the local SME group specializes in the integration of technical support means in armored vehicles, tanks and self-propelled artillery. These means can be auxiliary engines, fire protection systems or even CBRN defense means.

The small arms race is not over

The interest of a show like AAD is based on applications that could be used by local forces, but also by African forces as a whole. Small caliber weapons are no exception and it was clear that the 2022 edition was attended by many exhibitors who are specialists in the field, local and foreign. Mention should already be made of the high level of quality and the desire to meet multiple needs, in particular through weapons produced jointly in NATO and “Russian” calibers.

On the South African side, we know well the DENEL and TRUVELO companies, producers of quality and above all innovative weapons, like the CMS 20X42 anti-materiel rifle presented by TRUVELO. Another proposal from the local group, the CMS 7.62 x 39 with a caliber of 7.62 x 39 mm (“Russian” caliber) which could meet the needs of many countries already equipped with “Kalashnikovs”.

On the international side, it should be noted the presence of specialized groups such as Barrett (United States), Beretta (Italy) or the Belgian group FN Herstal, but it is especially important to note the strong presence of Turkish companies with no less than five companies, namely Aselsan, Kalekalip, Tisas, Derya, MKE and Sasa Group.

There were sports shooting weapons, training weapons, handguns, assault rifles of all calibers (including 12 gauge), machine guns and other grenade launchers. Here again, it was possible to observe weapons compatible with NATO and “Russian” calibers, a Turkish exhibitor having declared that the Russian arms market was vast and that it was necessary to tackle it.

The air world, drones, the fight against drones and anti-aircraft defense still prolific

Even if the land part has become essential at this show, AAD nevertheless retains a predisposition for aerial equipment, in addition to aerial demonstrations.

Thus on the aircraft side, the United States presented several devices on the display such as the C-17, the KC-46 tanker aircraft or their world-famous MQ Reaper drone. As for South Africa, the presence and flight of GRIPEN should be noted, especially after the technical support agreements have been validated until 2025.

Although a dynamic demonstration of aerial drones was expected, which unfortunately did not arrive, several systems were presented on the South African stands, as well as foreign ones. Among them, we will note the presence on the Turkish stands of armed systems such as the KSU-01 from the Lentatek group, the BAHA drone from Havelsan, or the TOGAN from STM.

On the South African side, several groups presented their products, but we will focus on the MILKOR 380 from the Milkor group. This imposing drone falls into the MALE category and was heavily armed for the occasion. The partnership between the South African group and several countries has been demonstrated through armaments, with the Al Tariq guided bomb and the DesertSting-16 laser guided bombs (UAE – Al Tariq and Edge), the Belgian guided rockets of the FZ group/ Thales, or the optical block, product of the American group L3 Harris.

Finally, to finish with the aircraft part, we will mention the electro-optical pod offered by the German joint venture Aerodata and Optimare. This complete system which includes radar, laser detector and optical means is proposed for mounting on PATMAR type aircraft.

Coming from the ground, the detection of aircraft and their neutralization were largely presented by the various exhibitors. We will retain in particular the Belarusian group LEMT which presented in particular its “detection radar – optical” ZORKI unit, capable of detecting a target on the ground as well as in the sky at nearly 20 km. This system can be coupled to countermeasure means.

The Lithuanian group Altimus-Tech offers a whole range of air detection radars including a complete set allowing the detection of aircraft at more than 400 km.

Regarding the anti-drone means, these were multiple, and in particular with electromagnetic or ballistic impulses. Thus Aselsan offers its IHASAVAR electromagnetic system and Transvaro presented a complete system combining several radars, optical means and a TRADJ-02 multi-frequency jammer.

The South African group Sandock Austral also presented its concept of anti-drone rifle, for the time being still in the state of a model. Finally, the SVI group, specialized in the production of protected vehicles, exhibited for the first time the MAX-3 6X6 equipped with a complete anti-drone system (detection and neutralization) armed with a 40 mm automatic grenade launcher.

As announced earlier, South Africa is recognized as being one of the most efficient and prolific research and development offices in the world, although many engineers and technicians have gone to other countries to demonstrate their talents. . Thus research on ballistics and protection, on new calibers of ammunition, on modernizations allowing rustic ammunition to be more effective, in particular in precision, on robotization, are numerous.

In the field of transmissions and communication/C2 in particular, the Reutech group is demonstrating numerous developments and innovations, in particular through fuzes for 122 mm rockets, operated by proximity meter. It should be noted that the latest radio sets produced by this group equip almost the entire local fleet and are sold for export.

In terms of robotization, we note the presentation by the local consortium of studies and expertise CSIR of a fully robotized 4×4 vehicle concept.

The means of detection and jamming of terrestrial electronic systems have also evolved, in particular for the deep and rapid detection of artisanal systems (RCIED) or mines by means of more efficient radars. This is the case with the latest generation of the HUSKY family, offered by the DCD group.

Finally, note the local desire to integrate the world of space and the AAC Space Africa group is doing everything possible to fully integrate this niche. The group presented on its stand a small communication satellite

Local willingness to integrate youth into research and development, including in the defense sector

The South African government has put in place a policy aimed at inviting young people to integrate the technological world, particularly in the “defence” part. As such, the organizers of the show invited many schools to the AAD site to observe the materials, discussed with exhibitors, participate in forums and a hall was devoted exclusively to young people, through small and medium-sized businesses (SMEs) linked to the Department of Trade, Industry and Competition (DTIC) and the Gauteng Growth and Development Agency (GGDA)

The aim of the local government is to make young people aware of multiple careers in the world of defence, in engineering, support or directly in the forces.