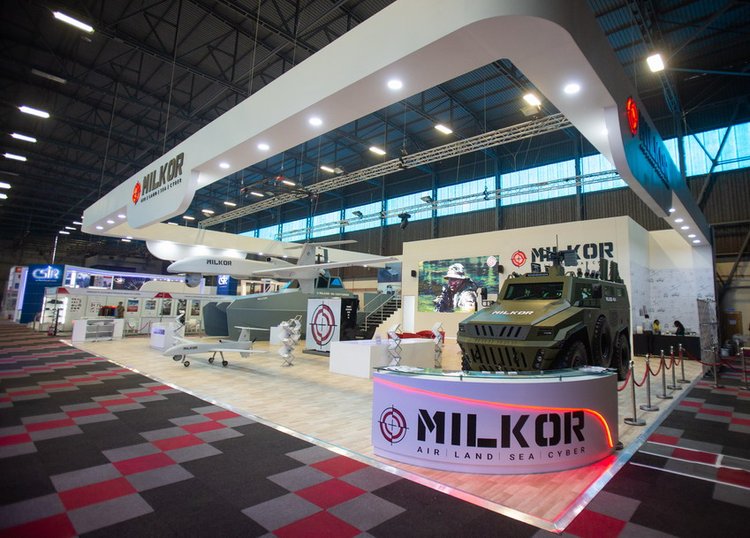 There are less than 100 days to go until the start of the exhibition, which takes place at Air Force Base Waterkloof from 21 to 25 September.

According to Daniel du Plessis, Milkor marketing director for AAD, “Milkor has strengthened each of its portfolios in every sector of air, land, and sea due to our continual commitment to push the boundaries of innovation.”

“With its dependable and best-in-breed products, Milkor is already a well-regarded global defence solution producer,” he said.

Milkor made a splash at AAD 2018 when it unveiled three unmanned aerial vehicles (UAVs), and since then has evolved its flagship Milkor 380 long-endurance, medium-altitude airborne platform. All avionics, communications, and payload integration capabilities have been developed in-house, drawing on experience acquired through the platforms featured at AAD 2018, and market research.

Due in part to its numerous payload possibilities, the platform can be employed for observation, reconnaissance, and opportunistic engagement. The 18 metre wingspan aircraft can be fitted with guided weapons and various payloads to perform multiple operations, such as SAR/ISAR (Synthetic Aperture Radar/Inverted Synthetic Aperture Radar), Communications Intelligence (COMINT), AIS (Automatic Identification System), communications relay, and communications jammer. The airframe includes five hardpoints: two on each wing and one at the centre of the fuselage, with the ability to carry larger systems if needed.

Du Plessis said the development of the Milkor 380 can significantly improve the capability of the various branches of service of the South African National Defence Force (SANDF), which is already using small UAVs and is looking at additional platforms for border patrol. Globally, there is a trend towards larger UAVs of this size.

Since 2018 Milkor’s Naval department has grown substantially, reacting to market demand, and at AAD 2022 will showcase its flagship naval vessel, the Milkor IPC (Inshore Patrol Craft). This, du Plessis says, is the ultimate patrol vessel suited for any navy, coast guard or military. “The vessel is a one of a kind in the industry and is built for long endurance missions. Operations of up to five days can easily be accomplished through a unique design and layout that combines crew comfort with operational functionality that is suited for surveillance and potential engagement. Various features and configurations of the Milkor IPC will be on display at AAD 2022 highlighting Milkor’s marine design and manufacturing capabilities.”

Since debuting its Milkor 4×4 Armoured Personnel Carrier (APC) at the previous edition of AAD in 2018, the company has further developed the vehicle to suit end-user requirements. The original vehicle was built with high ground clearance and high level offroad performance ideally suited to challenging African terrain. The vehicle’s operational capability has been expanded to deployment in the desert with the option of an inline central tyre inflation system and an upgraded cooling package. Multiple electronic sensors and remote-control weapons stations (RCWS) have been integrated to increase the mission capability, situational awareness, and personnel safety of the vehicle.

“As the Diamond Sponsor of the AAD 2022 edition, Milkor intends to further extend their consumer market and looks forward to displaying their world-leading technologies as part of the South African defence sector,” Du Plessis concluded.